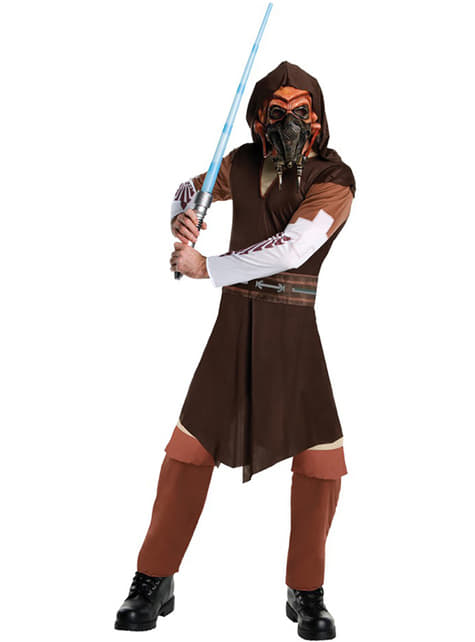 Includes: jumpsuit with hood and mask
Not included: lightsaber, shoes

You'll be able to use the Force and recognise good and evil with this Star Wars Plo Koon costume for an adult.

Plo Koon was a Kel Dor from the planet Dorin who became a Jedi Master, and became a permanent member of the Jedi Council before the Battle of Naboo. During the Clone Wars, Koon was one of the stunning High Generals of the Republic Army. Plo had a niece, Sha Koon, who was also a member of the Jedi Order, and served as a personal communicator between the forces of Jedi attacks and the rest of the Republic during the Stark Hyperspace War. He was a close friend of Qui-Gon Jinn, Micah Giiett and famous pilot Saesee Tiin. He was murdered in his Starfighter while flying over Cato Neimoidian by his clone troopers during Order 66.

This Plo Koon costume includes a brown jumpsuit with hood attached with white sleeves and an elaborate orange and brown mask.

Upload your photos to Instagram with the hashtag #funidelia followed by #funidelia05097.