Oktoberfest is not just a German party. Celebrate it with these Bavarian and Tyrolean costumes that you will find at Funidelia. 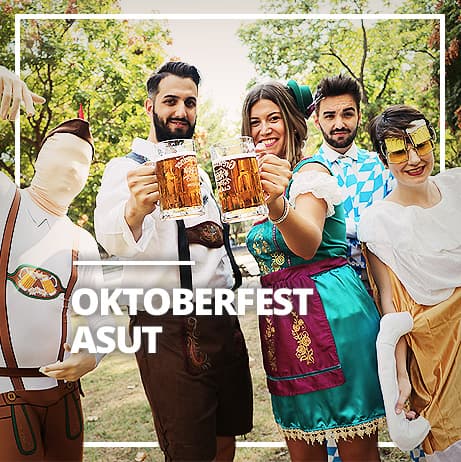 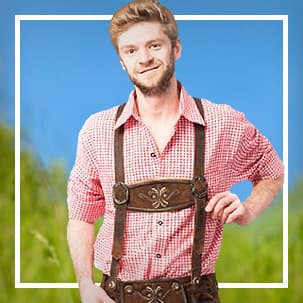 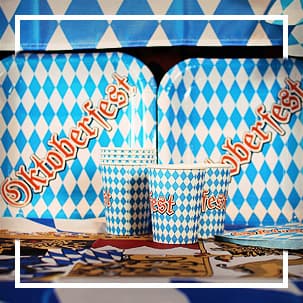 Available
Not Available
Quick view
-30% OFF

Do you know why the Oktoberfest is celebrated? 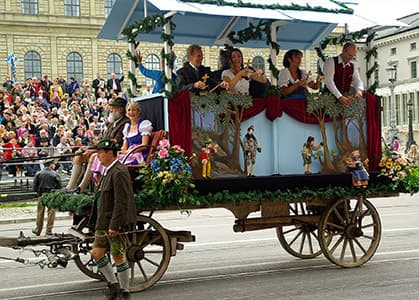 Widely known today as the “mother of all beer festivals”, the Oktoberfest tradition derives from the celebration of the marriage of Prince Ludwig and Princess Teresa.  On the 12th of October in Munich when Crown Prince Ludwig, who later became king married  the Princess Teresa of Sassonia-Hildburghausen. All the citizens of Munich were invited to attend the celebration held in the fields to celebrate the happy royal event. The closing ceremony included a horse race,  huge feast for the whole of Bavaria and the following year the decision to repeat the horse races gave rise to the origin of the Oktoberfest tradition.

It was 15 years before Ludwig became the first King and despite the fact that he was unfaithful to his wife and had several extramarital affairs, there was no obstacle to the celebration going ahead .

In honour of the silver wedding anniversary of King Ludwig I of Bavaria and Princess Therese, a traditional costume parade took place in 1835 for the first time.  After the wave of revolutions that shook Europe in 1848, the king, his wife and nine children had to go into exile in France. In 1948 they resumed these parades. Since then the parades have been held annually and Oktoberfest is still one of the most anticipated events of the year.

The Bavarians had already decided that this remembrance would be done every year with or without the King, yes, advancing it to the month of September to make better use of the good weather.

The beer festival has now become part of the British culture too and it’s a great way to get together with friends, enjoy some beer and have fun. London hosts one of the biggest Oktoberfests every year in Britain with an average of 50,000 people attending the festival

The Oktoberfest was cancelled 24 times due to wars on epidemics. From 1914-1918, the outbreak of the first world war prevented the Oktoberfest from taking place. The most tragic event to happen during the beer festival was in September in 1980 when a bomb exploded in a dustbin in Munich and killed 13 people.

The Variety of Beer tents at the Oktoberfest 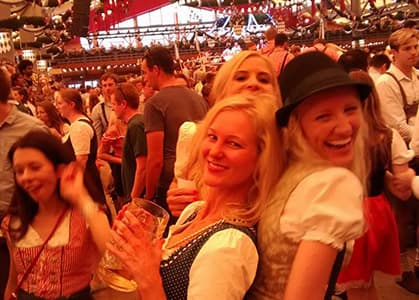 More than 6 million people turn up every year to celebrate the largest beer festival in the world.
The most popular beer tents belong to the main beer factories that have been based in Munich for centuries: Paulaner, Spaten, Hofbräu, Hacker-Pschorr, Augustiner and Löwenbräu. For example, only Hofbräu carp. Has a capacity of 7,000 seats.

Different beer is served in each stand and the interior decor is also different. The different decor transmits a different atmosphere so it really feels like your somewhere else each time you change beer tent

The main player at the Oktoberfest: The Beer! 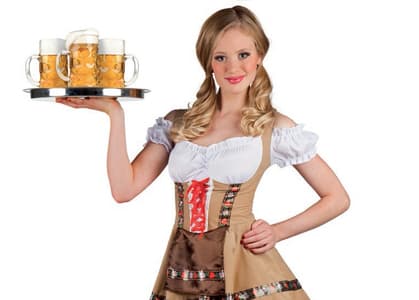 How to Pass for a true Bavarian

All the Oktoberfest lovers are crazy about everything German. Of course the beer wins first place followed by frankfurters, meatballs, sauerkraut and the bavarian outfits. 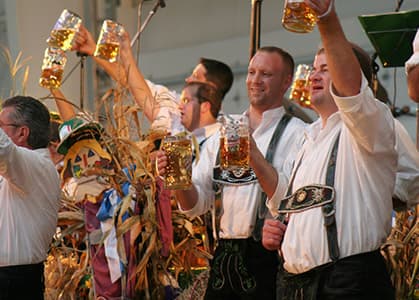 EIN PROSIT : Learn to sing "Ein Prosit", a classic Oktoberfest tune. The song is very short, and you can start singing it with your first pint of beer:

And the translation for this song is as follows:

With a few beers in your system you’ll catch on to that german accent in no time!!! 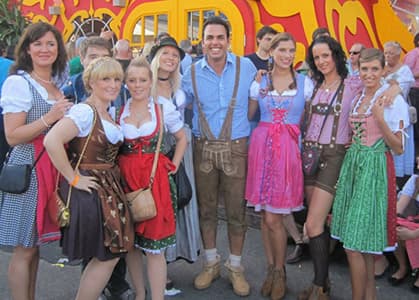 The women’s bavarian dress is called Dirndl, while the guys usually wear the traditional Lederhosen with a checkered shirt or a cardigan. There are numerous variations of the traditional dress originating from different areas in Bavaria and we’ve got all of them. 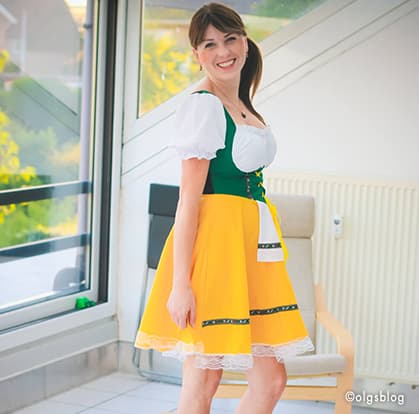 The Bavarian girls are one of the lead players in the Oktoberfest with the traditional Tyrolean women's costumes.

The dirndl originated as a more hardy form of the costume worn today: the uniform of Austrian domestic workers during the 19th century (Dirndlgewand means "maid's dress"). Simple forms were also worn commonly by working women in plain colors or a simple check. The Austrian upper classes adopted the dirndl as high fashion in the 1870s, making it a highly fashionable and popular must-have item in the nation soon after and this is how it caught on with the Oktoberfest.

The Oktoberfest celebration and the traditions of girls wearing dirndls has spread across the German borders. Before they were only available in plain, dull colours but nowadays of course they can be found in bright and joyful colours. It’s also now considered a sexy outfit that reveals a lot more of the female body.

If you’re going to go all out, then wearing a blonde wig to accompany your dress is a MUST( we recommend to take a look at our wide selection of blonde wigs)

The dirndl consists of a bodice, a low-cut blouse with short puff sleeves, full skirt and apron.

The Legend of the symbol of the Ribbon on the Dirndl

Will you be able to remember these facts when you’ve a few litres in your system? 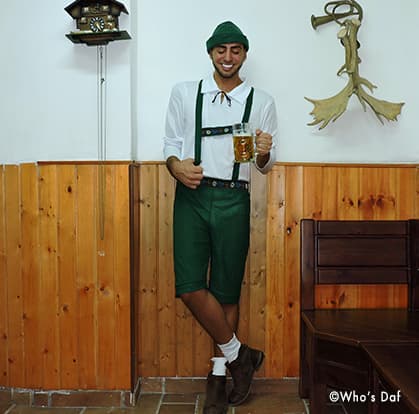 The Lederhosen, originally inspired by the Landhausmode, dates back hundreds of years and was commonly worn by peasants and poor people. This turned around, however, and in the 1800’s it became fashionable again as King Ludwig was a big fan of this attire.

The masculine version of this style is composed of a shirt, the classic hat of alpine felt known as “the tracthenhut”,  thick woolen socks with a bow that cover the entire calf, shoes, which in the past were used as work shoes made specifically for their resistance and stability, known as the haferlshuhe and then the Lederhosen (leather trousers,with braces(Hosenträger) attached, similar to dungarees .

There are 3 versions of Lederhosen:

Another characteristic of the Lederhosen is the Messertasche which is a small pocket on the right leg made for sheathing the knife.

The traditional colour of lederhose is brown or black, although other colours such as gray or dark green can also be seen today.

If you’re a true Oktoberfest lover then you can choose the perfect outfit and colour that suits you from our wide selection of Oktoberfest costumes. However, if you’re planning on going to Munich this year and want to stand out from the crowd we’d definitely recommend other alternatives such as the beer barrel costume or the drunk Bavarian costume etc.

Decorations for the Oktoberfest! 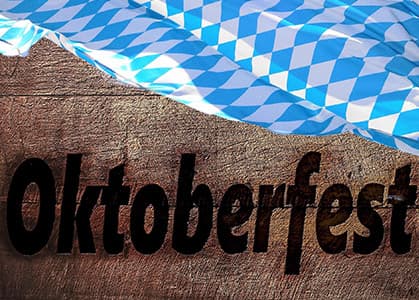 One need not venture all the way to the motherland Munich, or even down to the neighborhood watering hole, to partake in some Deutsch debauchery. Throw your own Oktoberfest party and create your very own biergarten. The on-theme essentials are pretty straightforward and we’ve got everything you need at Funidelia to turn your house into your very own biergarten. We’ve got a lot ideas and tips for this great beer event. Why not keep it traditional with Bavarian blue and white checked decor and Oom-pah folk music.

Make it the best beer party ever! No doubt everyone will be talking about this party for weeks with these amazing Oktoberfest Decorations.

Don’t forget to start off the party by singing EIN PROSIT!